[Adventures in Fantasy] Opening the Box

I have owned a copy of Adventures in Fantasy (AiF) for several years now.  I bought it by placing the high bid on an ebay listing.  Although I have had it for years I have never played it or completely read the rules.  I have pulled it down from the collection several times to flip through and read various sections of the rules.  It has also survived the two times I have drastically reduced the size of my game collection.  It's time to fully investigate the AiF boxed set of rules. 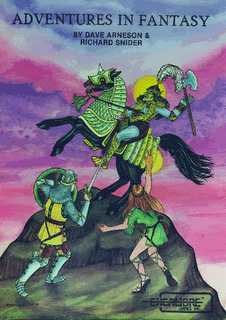 Condition: The box came to me in really good shape. I'm not sure if this is a good sign or a bad sign. The condition could mean the previous owner took exceptional care in handling the box and contents.  On the other hand, the condition could also mean the rules were not used and the previous owner forgot them on a shelf or in a box somewhere. The box now shows wear and is starting to separate.

The Authors: Dave Arneson and Richard Snider are listed as the authors.  I believe both of them are more famous for other works - Snider for Powers & Perils and Arneson for Blackmoor and Dungeons & Dragons.  I am aware of the debate over proper credit between Gygax and Arneson about the creation of D&D. I am a non-participant. I play the games and that is it.

The Box: The cover art depicts two heroes (a male warrior and a female mage) in combat with what appears to be a green-skinned, axe-wielding orc on a black horse.  It reinforces the following description found on the side of the box, "ADVENTURES IN FANTASY is the next generation of FANTASY ROLE PLAYING GAMES. YOU are the Knight sent upon a QUEST by the King to battle villains and creatures right out of Mythology.  From Dwarfs to Dragons your wits will be just as useful as your sword.  This game comes complete with separate CHARTS, 20-sided Die, Sample Adventure and complete rules for starting on the road to high Adventure."

The Contents: There are 3 books included in the box: Book of Adventure (character creation and related rules), Book of Faerry and Magic (magic, spells, magical combat, and the faerry races), and the Book of Creatures and Treasure (creatures and treasure).  There are also 3 double-side reference sheets that look like they could be used for a GM screen of some sort.  Everything from the description above seems to be there except for the D20.  I've been playing and collecting dice since 1980 so this is not an issue at all.

First Impression: I like what I see so far.  the The boxed set was an industry standard at one time.  I would like to see more boxed sets now.  The cover art is good at showing what might be a typical scene from a game.  Most important for me, it looks like fantasy instead of dungeonpunk. The combined page count on all 3 rulebooks is only 155 pages; much shorter than the current standard.  I also wonder if there were expansions planned to follow this boxed set since the description stated that the contents were "complete rules for starting on the road to high adventure." As far as I know, this boxed set was the only thing ever published for AiF but maybe there were additional rules to follow in a similar fashion to Basic, Expert, Companion, Master, & Immortal D&D. Who knows? I'll look for mention of it while exploring these rules.

Next: I will begin reading Book I - Book of Adventure.

Welcome to the blog of the semi-retired gamer.  You may be wondering exactly what the title means.  It's pretty simple to explain.  I have been playing role-playing games off and on for over 30 years.  Since I have been growing older, getting married, raising kids, going to college, and basically just living life my time to devote to gaming has been drastically reduced.  I still get to participate in a tabletop RPG session once in a while but I usually just visit the forums, read rulebooks, or work on my homebrew campaign world.  In a nutshell, I don't actively game as often as I used to so I am "semi-retired".

What is this blog going to be about? I know that it will cover various topics related to gaming. That's a no-brainer.  The subject of my first series of posts will be the Adventures in Fantasy boxed set of fantasy role-playing rules written by Dave Arneson and Richard Snider.  I will begin with a first impression and then move on to exploring the rules. After completing AiF I will come up with another topic.

What's the posting schedule? I will begin this weekend and plan on sticking to a once a week schedule.  Who knows? It could be more frequently or less.
Posted by Charlie Warren at 7:14 PM 2 comments: