I have been pretty busy the last few months since moving into my new house and with the summer being the busy time for the bus building business.  Things are leveling out and slowing back down to normal so I will be able to blog more often instead of relying on fan film posts. I have made some purchases in the meantime and the latest purchase had the following five books. 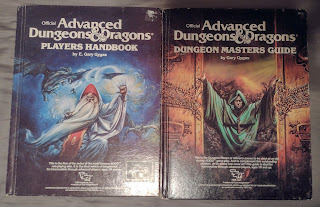 I received the AD&D books with the original covers as a gift from my Uncle in the summer of 1980; along with Deities & Demigods, the Monster Manual, and a ton of dice.  I would obtain the Monster Manual 2 and Unearthed Arcana later. I do not recall ever owning the Field Folio; no particular reason why other than I never did own it.
I left for the Army and decided to not take my books with me because I did not want them getting screwed up or anything.  Well, they wound up missing when I came back from the Army 8 years later.  I am in the process of rebuilding my old collection all these years later.  I plan on getting both Monster Manuals and Unearthed Arcana again; this time I will even try to get a Fiend Folio. 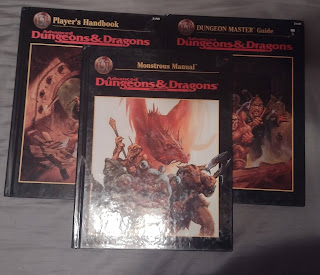 I never owned nor did I adopt my game to the AD&D 2nd Edition rules.  I browsed the books upon release when on my friends bought them but I pretty quickly developed a negative opinion because of the missing content - assassins,  half orcs, monks - and what felt like moving from the big table to the kids' table.
I admit that I never gave AD&D 2nd Edition a fair shake back in the day.  I have played a few one shots while I was in the Army and the game seems to play just fine.  I have also looked at some of the 2E retroclones and those really sparked my curiosity about giving the rules a second chance.
I was able to obtain the three core books along with the AD&D books so I am off to a good start.  I do like these black covers much better than the original covers so that was a bonus for me.  I actually thought the Monstrous Compendium loose leaf monster pages were a great idea in theory but turned out be be not so great in practice.  It is also kind of jarring to see the DMG so much smaller in thickness than the PHB when compared to the original AD&D books.  I am going to search for the Options books just to see how the game would change with the use of those add-ons.
Now I am off to do some reading...

Posted by Charlie Warren at 1:29 PM No comments: