The SteamCraft Core Rules have been selected as DriveThruRPGs Deal of the Day.  That makes the PDF 70% its regular price.  You can order it from here: www.drivethrurpg.com/product/100695/SteamCraft?src=DotD

Putting the Punk into SteamPunk!

In the spirit of Gibson and Sterling's The Difference Engine, SteamCraft takes you to an alternate, dystopian world where gears, goggles, and airships dominate life. The Industrial Age is joined by an early Information Age, combining into a gritty world where corporations use technological advances to amass hordes of wealth and power at the expense of the working class.  Meanwhile, technomages' ability to create by mixing magic with machine lurches ahead of their wisdom to control their creations and where scientific exploration is best done in coal powered airships venturing beyond the charted world maps.
It is a time when society threatens to plunge into either a dystopian future controlled by corporations and authoritarian governments, or one where heroic individuals manipulate information and technology to bring about a better future.  Intrigue, insidious evil, and the opportunity for both unlimited power, and unlimited beneficence await those that would explore this world.  The clever and the bold will shape that which it is to become.


With a Fantasy Edge

Just as Shadowrun mixes cyberpunk and fantasy, SteamCraft mixes steampunk and fantasy. The scientific wonders of Jules Verne and H.G. Wells mix with fantasy elements like dwarves and elves. The result is a world filled with ancient horrors as well as man-made beasts such as Clockwork Beholders. 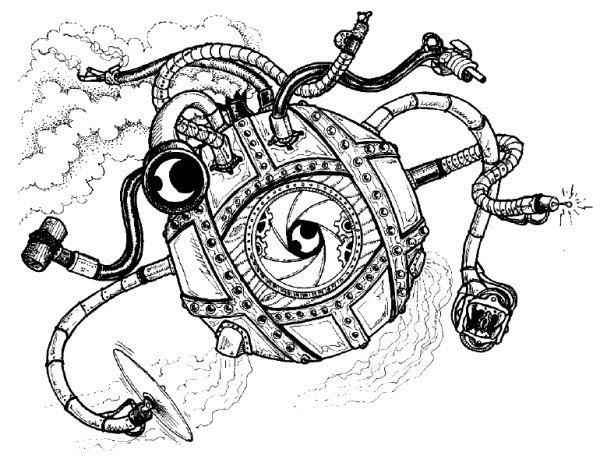 The following monster entry is my first attempt at presenting the Minotaur using the Perilous Journeys RPG game stats.

Minotaur
H: 60-70  A: 36–45  S: 40  AF: 6Attack: weapon +4/1d8/1d6Encountered: 1-4Description: Minotaurs appear to be large humanoid creatures with the head of a bull.  They are typically around 7 feet tall with a thick, rugged build.  Rumors speak of Minotaurs living on a diet consisting of humans and other smaller humanoid races.  Minotaurs are somewhat intelligent and may use tools and weapons.Comat: Minotaurs tend to charge their opponents in an attempt to gore them for 1d8 damage; when closed to grappling distance a Minotaur may bite for 1d6 damage.  Some Minotaurs prefer to use weapons such as spears, clubs, or axes and get a +4 bonus to damage when doing so.  Minotaurs tend to attack things smaller than their size.  Minotaurs may be wearing a ragtag mix of garments for armor in addition to their tough hide and have an effective armor factor of 6 points.Treasure: C
Posted by Charlie Warren at 8:40 AM No comments: