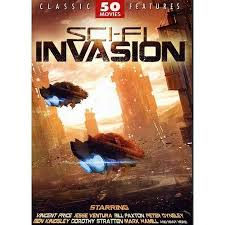 I am not just a fan of retro-games but I also enjoy B-movies. I have seen those mega movie DVD sets from Mill Creek Entertainment. There are several of these 50 movie sets available ranging from horror to mystery to science fiction. I have always wanted to check one out because the titles remind me of the old Saturday night creature features that would play on the local Fox channel back in the 1980s. My wife explained that she still found it difficult to buy Christmas presents for me so I told her to pick one of those up and she did. I have only watched one or two movies but I did notice that the 50 movies are split up among 12 DVDs with several movies on each. Once a month for the next year I will be viewing and posting about these "classic" movie selections. Disc 1 is coming in January...
Posted by Charlie Warren at 4:59 AM No comments:

I am just keeping it simple with a MERRY CHRISTMAS to all of readers out there!!!
Posted by Charlie Warren at 12:00 AM No comments:

I am assembling ideas for a pdf fanzine devoted to the Perilous Journeys fantasy role-playing game and the SteamCraft role-playing game. I plan on starting off either quarterly or bi-monthly until the ball gets rolling good. It will be highly inspired by the GURPS minimagazine Roleplayer. Obviously, fanzines typically include stuff like new character races, professions, flaws, edges, spells, monsters, items, etc. and stuff like ideas for contacts and adventure seeds just to name a few more. Is there anything I am missing or suggestions for ideas that would make it stand out.
Posted by Charlie Warren at 8:16 PM No comments:

2015 got kind of crazy for a bit and one of the things that had to be put on the backburner was the old blog. It just did not seem that important with the real world issues going on. The doctors finally figured out my wife has something causing her a significant iron deficiency but after months of adjustments it looks like everything is headed in the right direction. I am just thankful it was not cancer as originally speculated.


Frequency
I think a once a week posting commitment should probably do the trick. Any more than that can be considered a bonus.


Content
You can expect the same sort of posts that have always been made here. There will be new features, of course, but it will still be the same familiar place.