I actually went to the local game store to look into getting the Shadowrun 20th Anniversary core rulebook.  It was in stock at the store along with several of the supplements.  Before I make a purchase I always like to look around to see what else is available and I decided to do that real quick just to make sure I was not missing anything.  I walked around the display and looked down when my attention was drawn to the cover of the Dungeon Crawl Classics RPG. 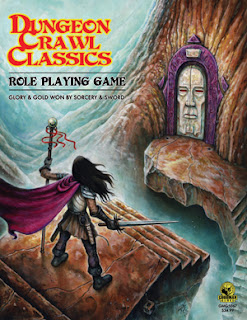 I was surprised that it was out but I admit that I had not follwed the development closely.  I knew there was a Beta playtest release done in pdf.  I was under the assumption that Goodman Games was still working out some of the kinds from that.  I also remember reading some of the designer notes that Goodman posted on their website and it made me interested to see the final design .

I picked up the DCC RPG core book and started flipping through it. The thing I noticed first was the small price tage - only $39.99 - for a massive tome that approaches the 500 page mark.  As I held it and started skimming through random sections of the rules I began to be completely captivated by what I read as I slowly made my way from cover to cover.  A few short minutes later I found my way to the counter to make my purchase.

I have had the DCC RPG rulebook for a week now so I have had the opportunity to read through it with a little more attention to detail.  There is a lot to like inside the covers of this game.  I am not devoting this post to a full review because I am still neck deep in my summer college courses but I give this game my highest recommendation.  I have messed around with most of the retroclones but I have never pulled the trigger on buying one; I do own C&C and also Pathfiner.  I believe that DCC RPG is exactly what many old school players have been waiting for because it is not just a retroclone or restatement but a game derived from the same inspirational material but the focus is on recreating the feel and tone of the early days and not just the rules;  that makes a big difference.  I can honestly say that if DCC RPG plays as well as it reads then it will be my new game of choice.