This post is about the Ops & Admin expansion for the Sanctions RPG from Purple Crayon Games. Liam Thompson is the creator behind these offerings, and he is a friend of mine. I bought both the core rulebook and expansion with my own money and was not given a free pdf or print copy for review; in short, I liked the description of the products and took a chance like any other paying customer.  I am listed in the "Thanks" portion of the Sanctions core rules, but I did not contribute other than bouncing general ideas back and forth.  Finally, this post is more about spreading the word rather than a full-blown review.

The Sanctions rulebook introduced the brutal biopunk world of the year 2086.  This is a world ravaged by warfare and climate change with refugee citizens living in walled Plexes to offer some sort of protection from the threats outside such as mutants. Honestly, life inside the Plexes is not much better due to increased crimes such as murder, inhumane experiments, and more.  Laws have been changed to allow the use of "Sanctioned Operators" to take on policing duties, perform search and rescue missions, and other tasks. 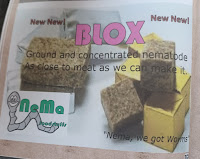 Ops & Admin expands on the world of Sanctions by focusing on the operators. This 136-page manual is presented as a guide for new operators.  There is new information on Plex threats, going solo, gear, transportation, gadgets, and more.  One of my favorite things in the book are the in-world ads and promos featured throughout the sections.  A great example of this is the ad for Blox which is very reminiscent of Soylent Green. Having these little extra tidbits of world information mixed in among the pages immerses the reader in the world of Sanctions.

There are some things that make the Ops & Admin book stand out from the previously released core rulebook. The original book was black and white throughout the interior while Ops & Admin has a large amount of color illustrations and the addition of the brown background on the pages make the book more appealing to the eye.  You can tell that Liam is getting more proficient with the word processing software he is using as this book is a definite step up in the layout.  In addition, there is now a disclaimer at the beginning of the book. 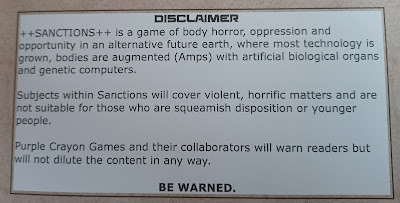 Some may not agree with these disclaimers on role-playing books, but I have no issue with their inclusion.  Palladium Books has been doing it for years and it never bother me with their books. I much prefer a creator sticking to their original vision and including a disclaimer instead of watering down their book in the hopes of attracting a wider audience.
There is more I could discuss but this post is just a way to point out a new product I bought.  If you want to break outside of the fantasy genre using a simple D6 dice pool system in a bleak future, then the world of Sanctions just might be for you.  Both manuals are truly affordable - Sanctions at $15.83 and Ops & Admin at $13.45 - so it is really easy on the wallet; especially in this time when role-playing books commonly go for $40 and more.  If you like pdf's that option is available as well.

Posted by Charlie Warren at 10:39 AM No comments:

As the year is winding down to a close - ALREADY - and 2022 is approaching quickly I am posting about what I have been doing and what lies ahead for this blog.

FOCUS: I had racked up a bunch of scheduled posts about fan films to help bulk up the posting in the second half of this year.  Instead of enhancing the experience, it became the focus because work got extremely demanding, and I coasted much more than I had envisioned.  I am going to reign in the focus back to games, related subjects, and geekery in general for most of the posts; anything else will serve to enhance the topics.

SUBJECTS: The games I plan to focus on in the coming year include AD&D (first and second edition), Arduin, Delving Deeper, and any other game that catches my interest such as Sanctions from Purple Crayon Games.  I also have projects of my own such as Grunts (a simple minis game using thhose little green Army men), Toldara (a campaign world for Delving Deeper or other old school games), and a secret project that I am keeping under wraps util it is further developed.

OTHER: I set a goal of reaching 1,000 posts before the end of 2021 at The Ruins of Murkhill forums and I am currently approaching 1,100 posts.  I was also asked to be a member of the moderation team and I accepted.  I am pretty stoked about both accomplishments because the Ruins are my favorite old school gaming forums.  I will continue to post there in the future.

That is a quick look back and forward at the blog. I really hope I can return to much greater posting in 2022.  What are your plans on your blog?

Posted by Charlie Warren at 7:43 PM No comments:

I forgot to post this around Halloween but I had intended to "improve" and complete the information in this monster inspired by Jason Vorheez.  I thought it would be a fun project for that time of the year, but I never was completely satisfied with the entry.  Maybe I will complete it in the future?  It's time to do some Christmas time monsters and I haven't even begun.

Read more »
Posted by Charlie Warren at 9:45 AM No comments: