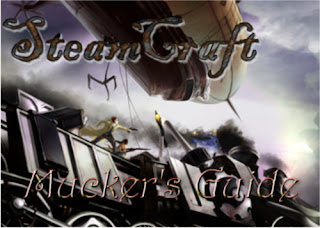 We are pleased to announce the launch of the SteamCraft Mucker’s Guide (Player’s Guide). https://www.kickstarter.com/projects/666449184/steamcraft-rpg-players-guide

Faster character creation rules
New edges/Flaws
New items and equipment
New steampunk gadgets
New spells
Introduce the societies mechanic to aid in character creation and development. PCs will have the option to join overt or secret societies at the beginning of the game. These societies will grant benefits to PCs but the societies will also require service from the characters. Societies is optional, but the goal of the mechanic is to help players understand how their characters fit into the world and give players and gamemasters ways to focus and structure play. Societies will provide agendas and personal goals for the characters that help develop your character’s story and the overall metaplot of your campaigns that goes beyond your character being a Mucker.

and much much more!

In the spirit of Gibson and Sterling's The Difference Engine, SteamCraft takes you to an alternate, dystopian world where gears, goggles, and airships dominate life. The Industrial Age is joined by an early Information Age, combining into a gritty world where corporations use technological advances to amass hordes of wealth and power at the expense of the working class.  Meanwhile, technomages' ability to create by mixing magic with machine lurches ahead of their wisdom to control their creations and where scientific exploration is best done in coal powered airships venturing beyond the charted world maps.

Just as Shadowrun mixes cyberpunk and fantasy, SteamCraft mixes steampunk and fantasy. The scientific wonders of Jules Verne and H.G. Wells mix with fantasy elements like dwarves and elves.  The result is a world filled with ancient horrors as well as man-made beasts such as Clockwork Beholders.

SteamCraft uses a d100/percentile system that is simple and intuitive to understand and easily modifiable to fit your game’s needs.

Characters are skill-based enabling players to create and customize their team roles and individualize their characters as they prefer.

Philip A Lee is a writer, editor, and game developer. In addition to his previous work on SteamCraft, he is most known in gaming circles for his work on BattleTech and Shadowrun.

Chad Bowser is a game designer living in Kernersville, NC. He has done work for various gaming companies. His credits include co-writer and designer of Cthulhu Invictus and writer for Victoriana.

You can learn more and back us at: https://www.kickstarter.com/projects/666449184/steamcraft-rpg-players-guide

This is just a quick post to recap what has been going on around here. Most of this stuff is relevant to gaming or this blog directly; some of it is related in a secondary manner.


Computer
Simply put, I need a new computer because the desktop I currently own is passing 15 years of use. It has served me well but it definitely not up to snuff anymore. That is why so many of my recent posts have "mobile post" as part of the title. I am not quite sure what I am going to get but I am not worried about playing video games or anything like that; I need something for reading (forums and general web surfing) and writing (blogs, hobby stuff, and other personal writing). I am considering some sort of chromebook for those purposes. Does anybody reading this know enough to give an informed opinion? Can I work on documents offline? Can I install Open Office or Libre Office?


Fanzine
I am a big fan of the games put out by Perilous Journeys Publishing so I want to help spread the word and support Perilous Journeys (fantasy), SteamCraft (steampunk), and new games they release in the future. I figured the best way to do that would be through a fan periodical. I am finishing up on the first issue and it will be released soon.

Reading
I have been on a Brandon Sanderson kick lately. I have read the first two Mistborn novels and I am currently reading Words of Radiance with the last Mistborn novel of the original trilogy and Elantris up next. I borrowed the Numenera rulebook and it is pretty cool; reminds me of running across Talislanta for the first time. I have also begun to really take an interest in the FUDGE rules.


Writing
I am still working on projects in the background. The main ones are currently a game "highly inspired by Adventures in Fantasy", an alternate bio-tech disaster setting book for a zombie apocalypse game, and updating my Toldara campaign world for one or more games.


The holidays are over and I am back to work tomorrow night. More later..