After a short break from posting about AiF, the madness continues..

My AiF posts have covered only half of the Book of Adventure so far.  This post will cover the remaining chapters of the book.

Underworld Encounters "Beyond the Dragon's Lair"
The title refers to the Dragon's Lair in the Setting up the Campaign chapter covered in my last post.  The Dragon's Lair is used as an example of how to set up an adventure.  This chapter explains how the GM designs additional underground areas for the players to explore after the Dragon's Lair.  There is a chart that will aid the GM by listing some of the more common underground creatures and the chance of the characters encountering them depending on the level of the underground they are typically located on.

Outdoor Encounters
This chapter is basically the outdoor equivalent to the previous chapter.  There are also various charts included in this chapter for the GM to reference.  Some of the charts included are outdoor encounter chance, outdoor evasion, terrain effects of types of soldiers (mounted, foot, mixed), and also a creature by terrain type chart for easy reference.  Some of the rules covered in this chapter include determining hostility of encountered groups, the procedure for asking for assistance or information, searching and foraging, and tactical or strategic movement in the game among others.

Bleakwood
This chapter shows a sample village with nearby possibilities for adventure.  There is some good advice about the rationale of encounters for the GM.  This is one area where I wish the player and GM information was separated into completely separate books but most people can separate player knowledge from character knowledge so it isn't a major deal.

The Combat Matrix in the Basic Game
This chapter explains the combat procedure used in AiF; there is a promise of further details in later supplements that will expand the combat options in the game.  A few points of interest for the combat procedure include comparing body types of combatants (human, snake, lion, bird, reptile, scales), an absolute minimum chance to hit of 2% (regardless of bonuses or penalties), and an absolute maximum chance to hit of 98%.  Optional rules in this section include hit locations, armor saving throw, and hit modifiers due to terrain areas.

How to Gain Experience
This final chapter of the Book of Adventure covers experience gain and how to improve your character.  If  it wasn't clear before, it becomes apparent when reading this chapter that there are only 2 character types or classes in AiF: Warrior and Magic-User.  This is made clear when the method for experience is shown to be different for both of the classes.  A warrior gains experience by defeating opponents in battle and a magic-user gains experience by using spells and defeating other magicians.  Character Levels are part of the game but not in the traditional D&D sense.  Other rules in this area include gaining a reputation, increasing social rank, and hirelings.

That completes my examination of the Book of Adventure and I will continue on my tour of AiF in my next post....
Posted by Charlie Warren at 7:24 PM 2 comments:

Email ThisBlogThis!Share to TwitterShare to FacebookShare to Pinterest
Labels: Adventures in Fantasy, AiF, Book of Adventure

Taking a short break from posting in the blog.  Work has been pretty hectc with college being extremely busy this week.  I will return shortly and continue with my AiF examination.  I also plan on posting some resources for my campaign world of Toldara; these will be open game content and will be for Pathfinder, Microlite 20, and Classic Fantasy Role Playing Game.  See you soon...
Posted by Charlie Warren at 7:16 PM No comments:

So, what is my problem with charts and tables?  It is the physical act of typing in the information and creating the chart or table itself.  It always seems so tedious and I always have bad luck with editing.  In other words, it always winds up being atleast twice as difficult as it should be for me.
Posted by Charlie Warren at 5:06 PM No comments:

Toldara is the name of my campaign world.  It's basically an amalgamation of ideas from all of the years I have spent playing D&D over the various editions.  I never went into any great details about the world or house rules until the last several years.  I think it started with the whole open game movement.  It kind of rekindled the old creative spirit of using a grab bag of rules from various sources to run a game.  Of course, the old grognards never bothered with needing "official" permission to use parts of various game rules in their campaigns.  It just happened during the course of play.

In the old days, I used to switch between games of D&D and AD&D.  Now that I've started this work on my own campaign world I noticed something somewhat funny.  I am typing up two sets of player documents for this world.  It dawned on me that I am making a "basic version" and an "advanced version" of the players guide for my world.  The advanced version started with 3E, moved to 3.5E, and is in the process of getting updated to Pathfinder.  The basic version will either be based on Microlite20 or the Classic Fantasy Role Playing Game system I am helping to design.

I just thought it was somewhat funny to notice that old habits never die...
Posted by Charlie Warren at 10:12 AM No comments:

* I can not take credit for coming up with the idea for this entry. I was checking out Grognardia earlier and catching up on earlier posts I had missed.  I ran across the series of posts for the ads of Dragon magazine and browsed through all of them.  The post on 7-28-2011 about FGU caught my eye because I remember it so well from when I had a subscription and it is still one of my favorities.  This is basically a chance for me to say "me too" on the Grognardia post.* 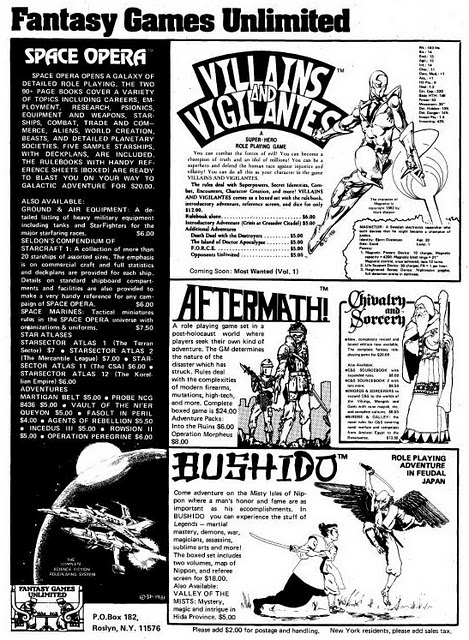 I have no idea how many times I have glanced at this ad while browsing through old issues of Dragon magazine.  I do, however, remember wanting to play every one of these games back in the 80's.  I have only owned or played one of these games.  That in itself is somewhat strange because I would buy just about any RPG I ran across when I was a teenager.  A few thoughts on each of these games is presented below.
Aftermath: I did want to buy this game to compare it to Gamma World.  I was a huge Gamma World fan but I also was interested in a more serious approach to the same genre.  It looked like Aftermath was more serious and realistic from looking at the box and ads.  I've actually seen this at one of the local gaming stores as recent as 3 years ago.  I never did buy it but maybe I should order it from the FGU website?
Bushido: I tried out Oriental Adventures once or twice back in my AD&D days.  I had mixed feelings about the rules.  I just didn't feel like the setting and AD&D rules were the best match.  I would have like to have had a better set of oriental fantasy rpg rules.  I wonder if Bushido would have satisfied that itch?
Chivalry & Sorcery: I never saw a copy of C&S in the store until 3E was out.  I purchased it because I recognized the game.  I did a little research online and found out it was far removed from the FGU version.  I'm starting to think I should have done more mail order business back in those days.
Space Opera: Another FGU game I never saw in the store back in the day.  I imagine I would have liked it.  I was a big time Star Trek, Star Wars, and Doctor Who and still am.  I got Star Frontiers and was pretty disappointed by what I felt was a lack of substance.  I got the impression that it was much more detailed the Star Frontiers and would have gotten a fair amount of play in my group.
Villains & Vigilantes: I still remember buying the boxed set of V&V with the rulebook and the Crisis at Crusader Citadel module included.  Once I made my first character and played V&V, I was hooked from that point on.  I bought several V&V supplements - mainly the bad guy books like Most Wanted - and we even made some ourselves.  It is still my favorite supers RPG and I am definitely going to get the new version from Monkey House Games.  V&V was the only game to be played as much as or more than D&D in my group.  The thing I remember most about V&V is the fact that it seemed to emphasize fun in a way that other games did not.
I think I'm going to take a break and visit the FGU website now...
﻿
Posted by Charlie Warren at 10:45 PM No comments:

An Offer I Could Not Refuse...

When 4E was released I promptly went out & purchased the PHB, MM,  DMG, Character Record Sheets, & the Dungeon Masters Screen.  On a side note, I have purchased the 4E red box out of nostalgia.  I've read through them and feel like it's a fine game BUT it just doesn't feel like D&D to me.  I want to make it clear that I am not saying it's a bad game, or a bad design, or even going to go into the reasons I don't care for it.   The point of my post is that even thought I do not plan on playing any 4E soon, I have continued to purchase the rulebooks.
This may seem contradictory to my opinion of 4E but you will see that it makes sense.  I work with a guy that bought into 4E in a big way.  He was utterly disappointed and has all of these rulebooks laying around gathering dust.  He mentioned them one day and I asked how much he wanted for them.  Believe it or not, he said I could have them for $10 each!  So far I have purchased Manual of the Planes ($29.95), Monster Manual 2 ($34.95), Players Handbook 2 ($29.95), and Players Handbook 3 ($34.95).  The number following each of those books is the MSRP - that means I got $134.80 (pre-tax) for only $40.  With those prices I am going back for the rest of the books.  It would be a shame to have this many books and never play the game...
Posted by Charlie Warren at 5:58 PM No comments: