In my recent post, Dungeon Crawl Classics RPG = D&D Perfected, I gave my initial reaction after browsing through the core rule book for the DCC RPG.  I had planned to explain my reasons a bit but life was extremely busy and demanding at that point.  Things have calmed down now so I will present the reasons I always intended to include in my original post. 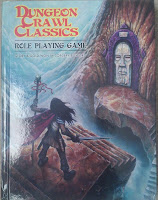 The cover of the DCC RPG grabbed my attention as soon as I first saw it up close.  I immediately flipped through the book to see how the rest of the art looked.  I was relieved to see a complete lack of the dungeonpunk style of art that bacame dominant during the third edition era.  I do not think that dungeonpunk was bad BUT I never felt like it represented the kind of fantasy I was interested in playing with all of the spikes, pockets, chains, and other unnecessary accessories and trinkets attached to the armor of the people in the illustrations.  I had high hopes after just a quick flip through of the rule book.
The Back Cover Text
After flipping through the rule book I turned it over to read these words:
"You’re no hero.  You’re an adventurer: a reaver, a cutpurse, a heathen-slayer, a tight-lipped warlock guarding long-dead secrets.  You seek gold and glory, winning it with sword and spell, caked in the blood and filth of the weak, the dark, the demons, and the vanquished.  There are treasures to be won deep underneath, and you shall have them."
I immediately started thinking of the day that my uncle David passed down his Holmes Basic Set and all of his AD&D rule books to me.  It was the summer of 1980 and it was quite a bit for an 8 year old kid and his buddies to take in but we did get up and gaming shortly after. 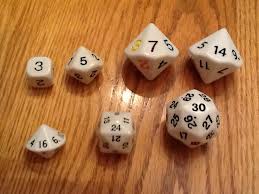 In addition to the standard range of polyhedrons, the DCC RPG also uses the d3, d5, d7, d14, d16, d24, and d30.  It seems that people are divided on these funky dice; some people are dead set against them while others really dig them.  I was a little skeptical of them at first but I really do think the funky dice add an extra dimension to the game.  They are not a gimmick but are actually used in a cool way to assess penalties to tasks.  For instance, your character might suffer a -2 die step penalty under certain circumstances so you would roll a d14 instead of a d20 on the attempt.  The DCC RPG brings back the sense of wonder we all felt when we first learned of the other sizes of dice outside the d6 found in Yahtzee, Monopoly, Risk, or other such games.
The Character Creation Funnel
Each player generates as many as four 0-level characters.  The funnel is the process of separating the wheat from the chaff and determining which chbaracters will go on to adventure further.  It is expected that atleast some, if not most, of your 0-level characters will not survive.  I have always wanted to use 0-level play in my games and now I have official rules for it.

My Campaign
I noticed as I was flipping through the rule book that my ideas for my campaign are actually better represented by the DCC RPG system so I am going to use it to power my campaign world of Toldara.  The start was delayed by a bit but it will begin soon.  This post is just the timp of the iceberg and I will put down more thoughts about DCC RPG in future posts.