I'm still painting miniatures to help scratch the old gaming itch; maybe I'll be fortunate enough to get a group together sometime in the near future.  As I continue to learn new methods and try out new tips, I have dipped my toe into crafting a miniature as well.  To avoid any confusion, I am absolutely not casting a metal miniature or anything similar because that is outside of my skill set and my artistic ability.  My miniatures are painted for tabletop use only and will definitely not win any sort of competition.

I didn't set out to craft a Gelatinous Cube or any sort of miniature at all - it just happened.  I was picking up some groceries and remembered that I needed to buy some new ink pens.  On my way to that particular aisle, I passed by a shelf with some crayons, markers, and related stuff.   For some unknown reason, the package for the Crayola Model Magic caught my attention.
I stopped and picked up the package to read the instructions and see what it contained.  The box contained four small pieces of the modeling clay for a price of just under $5.  I imagined that I could probably craft a few easy things such as boxes, sandbags, boulders, etc. to potentially use in a game.  Again, my miniatures are for effect rather than display or competition so $5 would be a small price to pay if it didn't work out as well as I hoped. 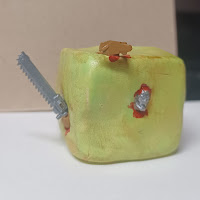 I got home and put the Crayola Model Magic with my other supplies and then it occurred to me that a Gelatinous Cube is basically a box, so why not give it a try?  I formed the clay into a cube and let it sit for a while and noticed it still had some flexibility.  I recalled that I had a few spare bits laying around, so I added a sword, a helm, and a boot to the clay to show parts of unfortunate adventurers caught by the creature but not yet fully dissolved. Finally, I put a coat of slime green on the cube and then some blood around the pieces not yet dissolved.
I'm pretty happy with the results.  Granted, it doesn't look as nice as a professionally produced miniature, but it cost me very little to make myself.  I still have the rest of the clay left so I will try to make some miniatures in the future.  I have plans for the slimes from the DragonQuest video game series and some oversized mushrooms as seen in the module In Search of the Unknown.  If it works out, there is a bucket of the clay available that costs twice as much but has 3 or more times the amount of the box.
Have you crafted anything to use in your games?

Posted by Charlie Warren at 4:00 AM