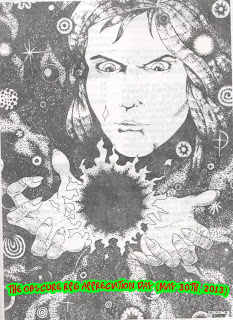 When I first read the post over at Mesmerized by Sirens about the first annual Obscure Fantasy RPGs Appreciation Day on May 31st I instantly knew that I wanted to participate.  The only rules for the post is that the subject must be a game from the fantasy genre and it must have been published between 1975 and 1989.  It was not hard for me to come up with a subject for my post.  Adventures in Fantasy has been part of my collection for several years now.  I won it on an eBay auction for the price of $12 if I recall correctly.  It seems I lucked into finding it before the OSR and all of the interest in these older games and the roots of our hobby took hold and caused the price to go up.  I have seen ridiculous prices on Amazon & similar sites - in the neighborhood of $200 or so - but I suggest that you do not pay these outrageous prices and hope that you can find a copy cheap if you are interested. I admit that I feel Adventures in Fantasy is an interesting historical gaming artifact that will provide insights into the early years of the hobby and a look at some of the differences between the game design philosophy of Arneson and Gygax but only if the price is right.  Since that original post the theme has changed to the Obscure RPG Appreciation Day so the subject for my post is still valid.


It is a fair statement to claim that Adventures in Fantasy was "the other fantasy game" for Dave Arneson and Richard Snider.  Both of them were better known for other games - Arneson for Dungeons & Dragons (specifically the Blackmoor setting) and Snider for Powers & Perils.  Opinions vary but the general consensus seems to be that people feel the game showed more of Arneson instead of Gygax OR that the design showcases more of a Snider slant due to the apparent complexity.


Adventures in Fantasy comes up on message boards every once in a while.  The site I have found with the most posts or conversation concerning the game is Dave Arneson's Blackmoor section of the OD&D Discussion boards.  I have contributed to some of the conversations myself.


Adventures in Fantasy is an incomplete game; at least, if you consider all of the stuff that was planned but never saw the light of day.  The boxed set does provide the very basic framework but there were several supplements announced in the forward of book one:
Dragon Lore & Legend
Ritual Magic
The Races of the Faerry
World of Fantasy
None of these supplements were ever published to the best of my knowledge.  I can only wonder what the complete game would have looked like or how it would have played.


I have searched the internet for resources specifically for Adventures in Fantasy but I have had no luck.  I tried scanning the original reference sheets that were included in the box but I was not happy with their appearance.  If anyone else is interested, I will provide a clean pdf version of these reference sheets for download.


The boxed set of Adventures in Fantasy did not include a character sheet.  I have searched around and have been unable to find one.  I was hooked up with some character write-ups to use as a guide so I will be making a character sheet for this game at some point.  An example character I ran across from the OD&D Discussion  board (thanks dwayanu!) is provided below.

Here are some monster stats from the same user and same source:


There are only two classes available in Adventures in Fantasy - warrior and mage.  The skill system does provided some customization options.


Like I previously stated, Adventures in Fantasy is a great historical gaming treasure to examine if you can find it for the right price.  It has provided we with many hours of interesting reading even though I have never played it.  Maybe I should crack open that box again and get a game started?

I would have liked to have posted more for this but I am in the middle of overtime season at work.