I came to the RPG/OSR blog scene later than many others so this has probably been covered before but I thought I would just give a shout out to one of the games that you should play if you have not already done so. 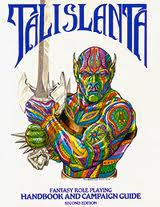 The image above is from the second edition of the Talislanta Handbook and Campaign Guide.  I bought this slim volume one summer day because I was looking for something different in fantasy gaming.  I have been a fan of the game and world ever since. Talislanta occupies a spot on my short list of games I would want with me if I was stranded on an island.  Rather than bore you with any details or recollections - I am sure there has plenty of them about this game - I will just point out the most important web resource for Talislanta.

The Library is the storehouse of free pdf files for most (all?) of the rules and resource volumes released in the life of the Talislanta game.  It is a shame that Talislanta is no longer in print but it is awesome that the  creator has made all of this stuff available for free.  If you have never visited the site or explored the world and rules of Talislanta, follow the link and enjoy.

Email ThisBlogThis!Share to TwitterShare to FacebookShare to Pinterest
Labels: out of print, Talislanta