The A-Z for April is completed so it is time to resume regular posting.  Continuing from part one of my DragonRaid posts... 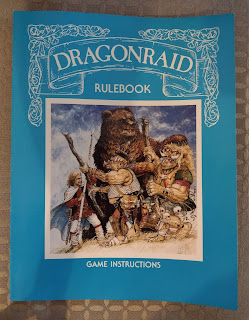 DragonRaid: Rulebook
The next section of the DragonRaid: Rulebook is The Armor of God.  This section mentions that people are instructed to "put on the full armor of God so that you can take your stand against the devil's schemes" (Ephesians 6:11). The special abilities of LightRaider Armor is explained in this section along with the six items that make up the Armor of God.  This is a great way to tie the game to the source material.  It would be worthwhile to adopt something like this for a traditional fantasy campaign where the paladins were clearly based on Christian Knights.
Battling Sin Enchantments is the next section.  Think of these as a curse or affliction that will harm the LightRaider in a spiritual or physical manner until they are overcome.
Combat Procedures is the largest section of this book at ten pages.  There is information on most of the typical combat rules and options as found in the typical fantasy game of this time period.  In addition, there are some advanced combat rules, rules for battling Dragon Slaves, a critical hit chart, and some additional rules for fighting Dragons.
The remaining four and a half pages contains seven small sections of rules. Rescue  discusses rescuing LightRaiders from Sin Enchantments; why it is not included with the Battling Sin Enchantments section is not clear to me.  Using Wordrunes and Teamrunes serves as a quick rundown on their format and use. Improving A Character explains the method of advancing your character through Maturity Units - think Experience Points - to reach the "glory and perfection of the Overlord of Many Names".  In real world terms, trying to follow the example of Jesus.  Loss of Maturity Units is an explanation of how to lose Maturity Units and the effect of doing so.  Team Action emphasizes that this is a team game rather than a competition.  Role Playing is a brief explanation of the subject.  Improving The Game offers up some suggestions on increasing the fun and enjoyment of the game session. 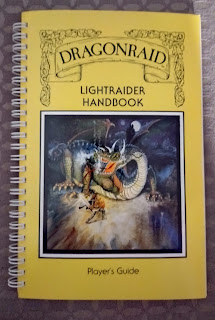 DragonRaid: LightRaider Handbook
This book is a different size than the other manuals in the box.  This Player's Guide is index-sized, spiral bound, and weighs in at 141 pages!  This small book is split into seven sections plus an index. I will give some details of each section but I have not had time enough to read this book.
Introduction to DragonRaid opens up with a welcome letter from the President of the Dragonraider Academy.  It is assumed your character has graduated after four years of study.  This section ends with a summary of the creation of the game world EdenAgain, the rise of evil in the form of the Dragons, and the original rescue by the OverLord of Many Names.
The Dark Enemy details the origins and game statistics of The Great Red Dragon (Satan).  This section also details the different types of Dark Creatures such as Goblins and Trolls.
The Victims of EdenAgain briefly explains that dragon slaves (sinners) have fallen under the influence of the Dragon and the goal of LightRaiders is not to kill them but to save them.  Some will be rescued and have a change of heart and join the ranks.
The Fellowship of the Light covers several subjects from The OverLord of Many Names, The Sacred Scrolls, WordRunes, Celestial Guardians, and LightRaiders and the TwiceBorn.
The World of Talania is given a brief overview in this section.  Talania is one of the five continents of EdenAgain and is where the Liberated Lands and the Dragon Lands are located.
WordRunes and TeamRunes details the 60 WordRunes and 20 TeamRunes available for use by LightRaiders in the game.
Appendices contains two brief sections.  First, a call to discipleship; spreading the Gospel to the those that have not heard it yet.  Second, a Character Journal that provides space to record the further exploits of characters in greater detail.
An index closes out the book.
More information will be in the next post.
-----------------------------
I admit that I have not read every word of any of these books but something that stands out to me so far is that I have not found anything denouncing D&D or other games as "tools of Satan".  This is surprising for me because this game was around during the Satanic Panic.  The impression I get so far is that DragonRaid is just being offered up as another alternative product available that happens to combine the roleplaying hobby with Christianity to present a tool for proselytization of others and reinforcing beliefs.  I have heard that DragonRaid was lumped in to the whole mess right along with D&D and other games back then.  I will keep my eyes posted for anything that contradicts my impression as I continue to go through these books.  If anyone can shed some light on this I would definitely be interested in hearing it.

Posted by Charlie Warren at 8:28 AM

Email ThisBlogThis!Share to TwitterShare to FacebookShare to Pinterest
Labels: DragonRaid