B is for Back to the Basics

B is for Back to the Basics

When I say "basics" I am referring to Basic Dungeons & Dragons but, more specifically, I am referring to the B/X iteration of the D&D rules and why I chose to convert my campaign - Toldara - to this older version.
The campaign world of Toldara was originally conceived soon after I purchased the core 3E books after a 10 year absence from the hobby.  My cousin Alex and I began work on this campaign world and started coming up with all sorts of additions and customizations we wanted to make.  We would eventually upgrade to the 3.5E version of the rules a few years later.
I was a little excited by the fact that 4E would include the option of Dragonborn player characters because we had a lizard man race for Toldara.  That did not go as well as we had hoped but then Pathfinder came along and it solved our issues.  We could just upgrade to that set of rules much like the jump we made from 3E to 3.5E.  In fact, we did just that and have been happy ever since.
What led to the decision to switch the campaign over to B/X D&D?  Well, the entire campaign is not getting switched.  Alex is taking full control of the reigns for the Pathfinder game while I decided to convert all of the information over to B/X D&D for several reasons.
B/X D&D is my own personal favorite iteration of the rules.  All you have to do is look at the cover 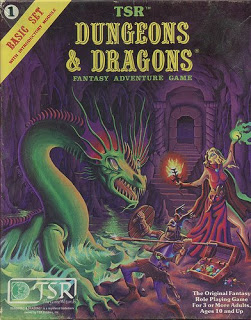 to see that this is a game of fantasy adventure with warriors, mages, and fearsome dragons to battle.  None of the other covers has caught my attention like this one.  The artwork inside the book further captures my imagination.  Even the choice of something simple like the font used in the rules reinforces the tone and feel of the game.  B/X is still the version of the game that I have gotten the most use out of in play time and enjoyment.
Another thing that drew me back to the B/X rules is that there are less of them.  Nothing against 3E or Pathfinder - or anything other "modern" set of rules - but I like the fact that there are less rules to manage.  That means that there is less preparation time and more play time.  I am 40 years old with 2 young children so gaming time is pretty sparse these days.  I would rather play than argue over the rules or spend gaming time trying to look up rules in the manuals.  As much as I enjoy the newer rules sets, there have been several times that play has been halted for several minutes to look something up and then maybe cross reference a few other areas to double check.  B/X is a lot more free wheeling in nature and does not try to have a rule for everything.
Those are the main two reasons that I am using the B/X rules to power my next campaign.  It should be interesting to get everything up and running in this older system.  There are many similarities between the systems but there are also some big differences.  I think the differences will prove the most interesting.
Posted by Charlie Warren at 12:00 AM