This post has been updated since it was originally published on April 20, 2012. 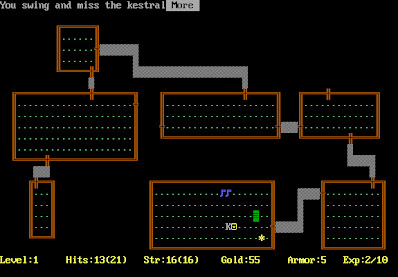 Several members of our gaming group took an introductory computers course together in high school.  I honestly remember very little of what was taught in that class; with time passing and things changing it is a whole new world when it comes to computer programming.  The one thing I do remember from that class is discovering the computer game Rogue.

One of the guys in the class brought it to school on an old floppy disk.  A few minutes later and it was loaded on to every computer in the classroom.  One by one, people immediately started it up and began playing the game.  Some people did not care for it but most of us enjoyed playing and would do so every spare moment we got in class.  At first, we would just show up early and sneak in a few minutes of game play before class started.  Then we started sneaking in some play time after the teacher gave us our assignments and retreated to her office.  There were a few times that one or more of us got caught playing when the teacher returned, and we could not get the game shut down quick enough.  I have downloaded a new version of this game recently and it has a "fake DOS" button that you can push to avoid that issue.  That sure would have helped out years ago.
Rogue is not overly complicated in presentation or game play, as you can see from the picture above.  It is just an old-fashioned dungeon grind with a small slice of a story.  Your character enters the randomly created dungeon collecting gold, fighting monsters, and improving in other ways.  The goal is to find some sort of amulet and escape the dungeon.  I do not know whether you use the amulet on some sort of monster boss or just escape with the amulet to win.  I do not even know what the lowest dungeon level is in the game.  I do know that none of us ever reached it.  Maybe next time...
If you are interested in more information about the Rogue game, you can learn more about it at the Wikipedia entry for the game.
You can play the game in your browser for free at the Internet Archive.
An entire genre of similar games, known as roguelikes, has grown from the original game.  A healthy list of other games is available at this Wikipedia list.
Posted by Charlie Warren at 12:30 AM

Email ThisBlogThis!Share to TwitterShare to FacebookShare to Pinterest
Labels: 10 Year Update, 2012: Gaming in the 1980's, A to Z challenge, Rogue