A-Z 10 Year Update: B is for Basic Dungeons and Dragons

This post has been edited and updated since being originally published on April 2, 2012.

Basic Dungeons & Dragons
In my old gaming group, Basic D&D saw a lot of play along with AD&D.  We were always swapping out modules or other materials between the two games.  Although none of us ever did purchase or play OD&D, there were several different versions of the Basic rules spread throughout the group.
Holmes Basic D&D Rules I was the only one that had the Holmes version of the basic set.  It is more of an introductory version because it only covers character levels 1 - 3; for further advancement, it was recommended that the reader move on to the AD&D rules.  It also deviated in some of the rules areas such as weapon damage being a straight D6 for everything with daggers being able to be used twice per round and two handed weapons being used every other round.  An attempt at balance but ultimately misguided.  There were also mention of classes and races that have not traditionally been part of the D&D rules such as the witch, samurai, and even some of the more exotic races being allowed if the DM approves.  In an interesting twist, the alignment system is also different.  The three alignment axis from OD&D is gone and the nine alignment axis from AD&D is not used but a five alignment system is used in the Holmes set.  It is interesting to note that one of the rules changes that has caused quite a stir from 4E was first tried in this early set of the rules.  This is still one of my favorite presentations of the D&D rules with the artwork, font, and layout all combined together.  It is a shame that no follow up products - Expert Set, etc. - were produced for this set.  I would have liked to have seen what could have been. 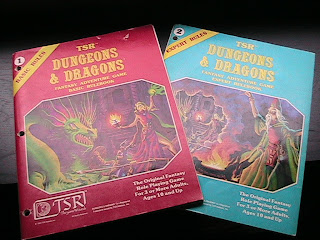 There were several sets of this version of the Basic rules owned by various members of our playing group.  There were some differences from Holmes in this set.  The three axis alignment returned and I believe there was a clear distinction between D&D and AD&D with these rules.  I also believe that variable weapon damage returned instead of the universal D6 weapon damage seen in Holmes.  As much as I absolutely love the Holmes version of the rules, I must say that the layout and presentation of the B/X rules is the perfect representation of Basic Dungeons & Dragons.
Mentzer B-E-C-M-I Rules ( Basic, Expert, Companion, Masters, Immortals) 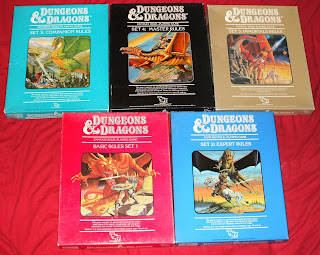 Everyone in our playing group had a copy of Basic through Masters;  it allowed play until level 36.  I personally never bought the Immortals set and I am unsure of whether or not other members of our group purchased the set.  Eventually, I believe that these separate sets were edited together to form the basis of the Rules Cyclopedia that would come later.  I thoroughly enjoyed that product but I admit that I was not a big fan of the Mentzer sets.  It all comes down to their presentation.  It really is that simple.  I felt that these sets were too "polished" and too "professional" to properly convey the feeling and atmosphere that the other sets were so good at getting across to me.  Put simply, it felt like the suspension of disbelief and immersion had been scaled down with the layout and presentation used throughout these sets.  Don't get me wrong, I would still gladly play using these rules today if I had the opportunity it but the presentation just was not my favorite out of the three versions.
I have very little to add to this post.  I still maintain that Holmes and the B/X rulebooks were my two favorite versions of the D&D. This opinion is without actually owning OD&D but from looking through Delving Deeper and other similar clones I think OD&D would most likely push those down a notch.  I will get OD&D at some point.
Posted by Charlie Warren at 12:30 AM