A to Z 10 Year Update: T is for Talislanta

This post has been updated since it was originally published on April 23, 2012. 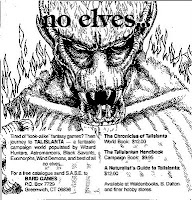 I saw this ad in Dragon magazine countless times during the 1980's.  You know, back when Dragon magazine was good by having articles that were truly useful and were not completely focused on just A/D&D; there were actually articles about non-TSR games included at times also.  The point being that the ad caught my attention and made me wonder what this Talislanta game was all about.  My gaming group was all about fantasy games at this stage and would pick up any new fantasy  games we ran across to try out.  We had played enough of the available games that it was time for something new and something different for the group. 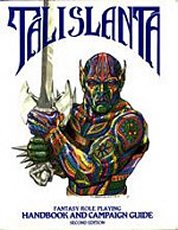 I remember that none of us were old enough to drive yet when I bought Talislanta.  I was over at my buddy Jamie's house and there was a game store about a mile down the road.  We were dedicated and would walk to that store every time we were at his mom's house; at least, until I was driving.  We were browsing the games on the shelves and then we noticed the Talisanta Handbook and Campaign Guide with the tattooed Thrall Warrior standing in a combat ready pose on the cover.
Our custom at that time was to split the cost of any new games we purchased to just try out.  If both of us liked it, then we would get another copy.  If one of use liked it and the other did not, the other person would buy out the other half or just go half again on the next purchase.  If both of us did not like it, then we were only out half the price of the game.  With the modern prices of these types of games it might not be a bad idea to get some like-minded people and arrange a purchase arrangement like that again.
I could go on and on about the coolness of Talislanta but I think anybody reading this could be better informed by going to the Wikipedia entry and then going to the Talislanta Library to check out the official Talislanta products that Stephan Michael Sechi has made available for download.  It's a true shame that there are no new Talislanta products to grace the store shelves but the creator has ensured that Talislanta will  never "die" by making the game available in this manner.
Since the original post there is a new version of Talislanta available now using several different rulesets.  The promotional video from the kickstarter gives a basic overview of Talislanta: The Savage Land.  DriveThruRPG has several versions of the original rules system available plus 5E/ d20 version and a D6 version as well.
Posted by Charlie Warren at 12:30 AM

Email ThisBlogThis!Share to TwitterShare to FacebookShare to Pinterest
Labels: 10 Year Update, 2012: Gaming in the 1980's, A to Z challenge, Talislanta