A to Z 10 Year Update: W is for Warhammer Fantasy Roleplay

This post has been updated since it was originally published on April 26, 2012. 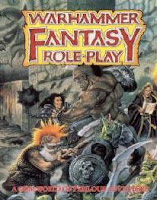 Here is one more game that I owned but never played.  I got it hoping that I could add on to the A/D&D material - races, classes, etc. - that we used during play.  I got it and at first flip through I was somewhat disappointed because the material did not readily lend itself to immediate use within the A/D&D rules.  In other words, to be used the material would have to be converted from one rule system to the other.  Plus, there was some resistance against learning another new rule set at that time among members of the gaming group.  I put WFRP away for years and never did get around to running or playing in even one single session of the game.  I wonder what it would have been like.

Note: This post will be my last post in the 10-year update series.  My original X, Y, and Z posts were filler, and I was never happy with them.  I considered replacing these three posts with completely new posts, but I felt that went against the idea of updating the old posts.  Rather than piling more filler upon more filler I am stopping with the updates on the W entry.

Email ThisBlogThis!Share to TwitterShare to FacebookShare to Pinterest
Labels: 10 Year Update, 2012: Gaming in the 1980's, A to Z challenge, Warhammer Fantasy Roleplay