I can hear the protests already. "Jason in space? That's goofy.", or "Taking a horror franchise into space is just a short-lived fad that they should not have done.", or something similar.  I understand but let me explain how JASON X is much better than similar efforts from other horror franchises.
JASON X is the third installment of the Friday the 13th film franchise after New Line Cinema bought the rights; the 10th entry into the overall series.  JASON X embraces the film's setting much more clearly deeply than their previous two efforts.  JASON TAKES MANHATTAN was in New York but not for very long and other than a nod or two it could be set anywhere.  JASON GOES TO HELL fails on the same level.  Sure, Jason does go to hell but it is really just hinted at by the demonic arms pulling him down into the earth at the end. 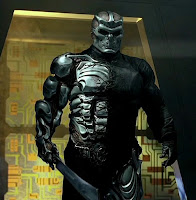 JASON X does not just tease the viewer with hints at space; the film completely embraces the space setting.  The technology level is futuristic and obviously advanced from today.  Jason was cryogenically frozen, there are space ships, hologram, space station, virtual reality gaming, space marines, nanotechnology, an android, and even Jason gets upgraded at one point!
I will not argue whether or not the idea of Jason in space is goofy or not.  Of course, it IS goofy but these films are not meant for deep cranial thought.  These films are meant for fun and entertainment.  Viewers watch these moves for the body count and creativity of the kills.  JASON X definitely delivers what may be the best kill in the entire series.  This is the one scene that even non-fans seem to like.  Click the link and tell me what you think in the comments.
JASON X also embraces what has come before in the series. The group of young adults in the film are confined to the space ship much like the campers being confined to Camp Crystal Lake.  There is a lot of darkness and moments of isolation in the film.  At one point, they use a holographic depiction of the camp to distract Jason while they are trying to accomplish a task.  Jason even does a sleeping bag kill like he has in previous films.
JASON X is a fun slasher and one of the better entries in the Friday the 13th franchise.  Give it a chance instead of pre-judging the film and you might just like it.
Posted by Charlie Warren at 4:00 AM

Email ThisBlogThis!Share to TwitterShare to FacebookShare to Pinterest
Labels: A to Z challenge