I am not discussing a film for the "W" entry but I am asking a simple question...

What is the WORST horror film you have ever seen? 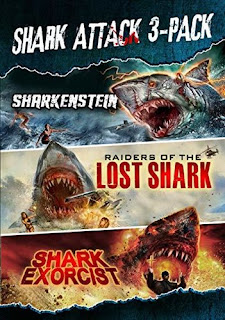 I will do better than name one film but I will say these are the three worst horror movies I have even seen.  My son and I were on a SHARKNADO kick and we decided to find something similar.  I stumbled across the Shark Attack 3-pack at Wal-Mart for the low, low price of $5.  I thought they looked fun and bought the DVD.  I was about to find out just how very wrong I was just a short time later.

I attempted to watch these movies back to back and I failed.  I fell asleep several times and it took about a week to watch all three.  My son gave up much quicker than I did.  He still has not watched any of these movies completely to this day.  Besides having sharks in each movie, these three movies share some common traits.  The acting is wooden and amateurish at best.  The special effects are not really that special at all.  The stories are all slow and tedious.  The dialogue is pure gibberish.  They are all just AWFUL from start to finish.  There are NO similarities to SHARKNADO and no joke to "be in on" because the joke WILL be on you if you watch these films.

Raiders of the Lost Shark trailer

Posted by Charlie Warren at 4:00 AM

Email ThisBlogThis!Share to TwitterShare to FacebookShare to Pinterest
Labels: A to Z challenge